The "Outing" of Banksy. 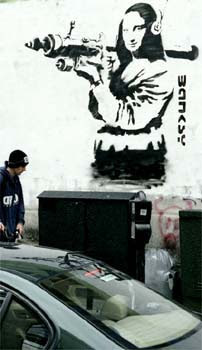 Supposedly Banksy has been outed. Gasp shock horror he went to a posh school and is from the south-west, run the headlines, that won't help his street image they snicker. I am surprised given the propensity of security cameras in the areas he has been attributed as having painted or vandalised depending on your point of view, nobody has identified him before.

He joins the author of Primary Colours, the Girl With A One Track Mind and more recently Fake Steve Jobs, to name a few in being outed possibly before they wanted to, if at all.

There's a lot to be said for mystery, its more exciting. Perhaps that's one reason why conspiracy theories are so popular rather than the depressing mundane truth.