Gymslip hysteria shows the age of satire is dead

Defying parody, a £70million-a-year quango warns schools it may be unlawful for them to require girls to wear skirts.
And why? Because ... wait for it ... under Harriet Harman's Equality Bill, compulsory 'gender-specific' uniform may breach the rights of transsexual pupils!
Schools that force girls to wear skirts may be breaching the rights of girls who feel compelled to live as boys, according to a quango
It is still unclear how much time and public money the Equality and Human Rights Commission has lavished on its 68-page report. All that's certain is that this lunacy proves, yet again, the age of satire is dead.

As a former pupil of Grotbag Comprehensive, now demolished with the playing fields sold and rebuilt as the Macky D Academy High, managed by EduCorp. the whole hysteria whipped up by some newspapers over the mythical banning of schoolgirls wearing skirts rather bemuses me. 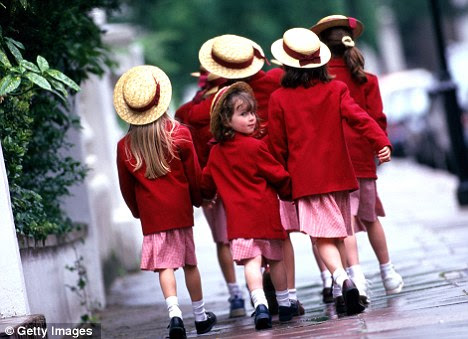 In my memory, with the rare exception, often by wearing a skirt so short (although incredibly long by some some trannies standards) they ended being being sent home. Which is what they wanted. Many years later there's a future partner who excitedly suggests they put on their old uniform for a bit of fun only to be disappointed when she appears in a pair of trousers, an old blouse with a frayed cardie.

But apparently there are schools where skirts are worn and in the current guidance from the Equality and Human Rights Commission to public bodies regarding trans users one part politely suggests transgendered boys should be allowed to wear trousers and that it may be unlawful if they don't. All perfectly fair and right one might think given the great discomfort and distress a trans boy may feel if no allowance was made. Suddenly it gets blown up to be a blanket ban on school girls wearing skirts.

(Though personally this blogger feels it to be a highly retrograde step that in the second decade of the 21st century there could be schools which only permit girls to wear skirts in this country. That along with my views on gender identity will probably be dismissed as "ultra-feminist drivel" undermining "traditional British values". I'm not sure what's meant by the latter comment presumably in "Mail world" that's going back to sending unmarried mothers to mental institutions and hideously racist comments are just a bit of banter).

Total bollocks of course, but you suspect they don't really care about the truth when there's newspapers to fill and a daily quote of things to hate to be met, especially if it allows them to bash their traditional targets. Which is that hideous notion of basic transgender rights. As it rumbled on the commenter's, especially the male ones, a little hot under the collar. Many trans children have a hard enough time as it is with bullying and some driven to suicide without attacks like this and the suggestion you are not trans or in a minuscule group that its not worth bothering with. The numbers one suspects are under-reported, some parents, often well meaning, try to deal with it privately or the child learns to hide it.

Its not the only recent example of a document being so distorted it bears no recognition to the original. Claims of secret plots appear regularly along with phrases like PC gone mad and lunacy. Often after someone's done some digging the truth is rather more prosaic with things done for very good reasons. Which shows despite claims to the contrary shows that you can make it up.
7 comments:

In tabloid speak I would probably be described as follows "Gender-bender SEX-SWAP tranny Lucy (31)...".

Yet it could be even more offensive a quick search through Google News shows that terms like "lady-boy", "she-male" and others, have appeared in mainstream newspaper websites in the UK and around the world. Even within serious publications obsessed with attention grabbing headlines and search engine optimisation rather than accuracy and sensitivity. A recent ruling by the Press Complaints Commission has ruled that the Belfast Telegraph was wrong to the use the tranny in a headline to refer to a transsexual. The article was about a transsexual who worked in a rape crisis centre. One could argue that her being there should be open to debate, I don't think there is consensus among the general public or among rape victims (though many forget or ignore the many transgendered and trans historied men and women who are themselves victims). In the end a partial slap on the wrists to a regional publication regarding the headline but not the tone of the story, may give slight difficulties to headline writers, but it wont stop future pernicious stories.

Example two follows pregnancy the of Scott Moore. One of a handful of trans men to go public with the fact that they have a bun in the oven and not as some reports state the second occurrence to have happened in the world. Shortly followed by a third and we're back to how can they be men if they have babies it shouldn't be allowed wont someone think of the children etc etc. The arguments have been better put elsewhere and I suspect most readers of this are already familiar with them. It is also a dangerous path to start going down if we were to decide to prevent certain individuals or groups from getting pregnant.

It would be a dangerous path if we were constantly to shout down our critics and probably counter productive that's not to be apathetic just to know there is more than one way to skin a cat. (Who ever come up with that phrase, why skin a cat?)

I also challenge commenter's to describe themselves or me (the latter being something I may regret) in a tabloid style.
7 comments:

I Went To A Marvelous Party - Part 2

I did snap a photo (such a cliché I know) before taking the decision to take the phone instead of the camera.

My make-up wasn't helped by the inadequate lighting in the hotel room, next time I'll bring my own mirror and do it in the hall way I think.

Finally making it outside to where a chill had joined the rain and guessing from the slow trickle of people crossing the road and going down a slope that the entrance to the Pink Punters must be around there.

At this point someone stepped out from the reception entrance and said my name, that someone turned out to be Lynn, the esteemed blogger and leading light of the Nottingham area here with another girl who had absolutely gorgeous hair travelling down for the evening. Both looking great, unlike myself and exuding an air of knowing what they were doing... unlike yours truly.

Once arriving at the venue my first good move happened when I resisted the temptation to attempt a dance around one of the poles on the bottom level, a sight which would have scared many innocents. I did attempt to dance on the level above later but realised that I still have no rhythm. Eventually I followed up to the top level where I saw a few more familiar and unfamiliar faces and chatted briefly with a few some whose names I failed to gather above the noise, for which I apologise massively and profusely.

Some time after midnight Lynn left for the drive back to the East Midlands. Nice to have met, It was a unexpected delight to see you. After she left I found myself stood between a conversation on one side was Jo Angel the overlord of the Angels site and forum whose tenth anniversary was the reason we were all here. There were others including Sarah-Jane, Sophie, Justine, Jenny, Petra, Helena, Saffy, Toni Louise (most looking totally in their element) and so many others (mentioned and photographed elsewhere) that my brain couldn't process as it was whizzing along trying to match names to faces I recognised. As Evan Dando once sung "I'm never good with names but I remember faces". I am bound to have left some out and for that I apologise, maybe next time? Apparently I was mentioned in a tweet by Becky. Jane and Becky looked like a fabulous couple who were comfortable together. Given that Becky has been out even less than me she looked like she hadn't been away.

The following morning after 4 hours sleep and with a poor attempt at shaving for the third time in less than 24 hours I checked out and made a vague plan to head back and explore the centre of Milton Keynes. Living around Swindon I'm used to roundabouts but blimey there's a lot in Milton Keynes was the major thing I learnt from this.

In short it was a good night, I learnt that its worth paying for a half decent pair of tights, gloomy lights help to hide rushed make-up and I wasn't as middle aged as I'd suspected.

(The title as some may have guessed was inspired from the Noel Coward song of the same name).
4 comments: