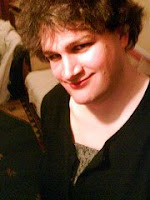 A sort of filler post not that i don't have things to write about just that I have deadlines to meet which prevent me consolidating my thoughts or catching up with non business things. My family claims once I'm fully occupied I'll stop my little "habit", there's no evidence to that so far.

I did take a little time to visit my mum and took part in a little quiz at a local bar for which we came second behind the people who takes these things way too seriously (at the risk of sounding like a bad loser).

On the way back I saw the small wind farm that has just been erected just out of town which to me looks a great new local landmark but given the protests about similar projects around the country I am probably alone in that opinion.

This is about trans issues and does go a little sweary so don't say you have not been warned.

The arguments are not brand new so you might be familiar with them. I have had a bit of time where I have been feeling down and instead of lashing out at the innocent I thought some guilty parties deserved my wrath.

The problem is I feel I am preaching to the converted whereas I probably need to enter the lions den and combat these things against them to the general public and worried parents.

On transgendered kids, It is still an area that needs a lot of research. Sadly some have already made up their minds and will never change. Putting their own prejudices and dogma before the best treatment for the children (whatever that may be).

Now I do not believe in a one size fits all. Every child is different but here's what doesn't work in my opinion.

Pushing, forcing them to the assigned gender. doesn't cure them. It only teaches them to pretend and fake it, became a superb secret agent, hide it, fucks them up. It just creates self hate, loathing, lack of confidence, depression, drug abuse, suicides.

I know transitioning (if that is what it comes to) is hard whatever way (both on the loved ones and the individual) but love and support from you will make them happier.

There are those who believe that they are all "pre homosexual" and not transgender, this does wrongly continue the assumption that gender identity and sexuality go hand in hand. Nor should they be dismissed as just autogynephiles.

Children need to go on a voyage of self discovery. Picking out one dress out of a dressing up box does not automatically make the child tg or gay, its just playing, using their imagination, exploring, having fun. Don't dump all this crap on them by telling them its not for boys.

As for where to go, there are self styled "reparative" therapists offerings "cures" and that all they need is a good male (or female) role model and that a mother should not get too involved in their young boys life and everything would be just hunky dory. It is what my mother thinks and I really hate the fact she is blaming herself because I do not identify with my birth gender. But it isn't the case.The thing you learn is that what you learn is that trans girls and boys come from a wide range of backgrounds and types of families. Another suggestion is that it should be beaten out of them, hopefully other children will join in and teach them that its wrong which leads to what I've said before.

Whatever they may say I am not abnormal nor are these children.
5 comments:

My Own Little Thing

Oh look a field of trannies and they're about to link up and break into a rendition of I'd Like To Teach The World To Sing. But oh no someone's able to explain basics of the off-side law. This shouldn't be allowed. What next beer?

As previously stated if you ask 10 trannies for their definitions of the trans condition, you will end up with 11 different view points. If I am one of the 10 then mine is THE ONLY ONE THAT'S RELEVANT.

Only joking (I think).

I am happy to associate myself with the transgendered family but like any family (work, biological, household, etc.) you may love some but they can really do your head in and frustrate from time-to-time. What I mean all this back-biting and point scoring in some areas is not helping me.

So I need to take a step back from those cul-de-sac's, to do my own little thing. While I get things in perspective and decide on my way through the forest for a while. It's a compromise away from ripping it all up which have felt like doing several times and which my more rational side prevents.

I am, over time, becoming less ashamed over who I am and who I will be, the moments of self-flagellation are becoming more and more spread apart. Over the days my mood has swung back and forth, one day I'm coping and feel such a fraud for even seeking help, the next I feel terrible and despising of the person looking back at me.

Some are of the opinion that you are better off staying away if you wish to transition I would not go that far but holidays away from the trans bubble are welcome at times.
6 comments:

Sexy Things To Some Sexy Music

I am no activist however I try to lobby and campaign on behalf of few LGBT causes when I feel their important enough and I can make a half decent fist for them. Perhaps the best thing I can do is just be there outside and present a good impression to the public who have not seen an obvious transgendered girl before.

You have seen in past entries my faults and my poor first attempts. Sometimes only the final release is visible with the alpha and beta testing images removed.

Initially I was ashamed about it but latterly as I feel more confident in who I am I remember such things as my tg early teens.

Like most biological early teenage years there's a lot of posturing and one long embarrassment. Unless you're in Skins, then you'll be having sexy parties, while looking sexy and doing sexy things to some sexy music or 90210 where you'll be stick thin and in need of some Kendal Mint Cake and pies. Afterwards while acknowledging how bad it was you sometimes look back fondly.
2 comments:

If you only read this site through a rss feed reader (through the Opera browser, Google Reader, etc) Then you may have missed the links I post on the side via my Delicious account. So here's the filleted highlights from the recent past (apologies if you have already seen them).

Firstly there's a rather nice and touching eight and a half minute film (available through this page) from the East Midlands edition of the BBC's Inside Out in which Debbie Davis talks about her past as a transsexual through to today.

Secondly there's the campaign (as reported in the Oxford Mail) to persuade the Oxfordshire PCT to pay toward their SRS. Although the signs are encouraging pressure needs to be kept up.

If you are a British citizen or resident and have not already signed the petition (here) I would urge you do so by the deadline of April 7.

And after you have done that scribble a complaint to Ofcom (here) about Moving Wallpaper (Tx: 20 March 2009, 21:00-21:30, ITV1). Espcially if you think the humiliation, belittlement and being prejudiced about transsexuals is deeply wrong.

If you wish to watch it do not use any torrent things as it would be very, very terrible if ITV didn't receive any ad revenue from such a prejudiced piece.

I'll leave with a commercial.

I preferred She-Ra to He-Man (ugh he's just a beefcake narcissist) and watching this clip many years on it was fairly apparent why. I mean those boots are gorgeous and the whole transformation sequence wins over the poor animation (then most of the animation on children's tv was like that). I remember wanting to transform into a girl just like that when the dust settled there I would be.


Just a break from the serious stuff.
3 comments: