November, the month where a constant flurry of leaves fall on the path, especially shortly after you've swept the last downfall. Most of the nearby trees have shead, though there's one stubbornly grasping on to most of its leaves refusing to acknowledge the seasons changed.
So analysis revealed a number of vegetarian sausages had meat in them which probably makes them more meaty than many actual sausages. Personally i've always hated sausages even when I ate meat and never see the point of trying to make vegetarian foods look like ersatz meat.
If only I had a pound everytime someone asked me a question about protein as if it's only in meat. Well I wouldn't have a lot, but more than enough to fill a basket with good protein rich foods. 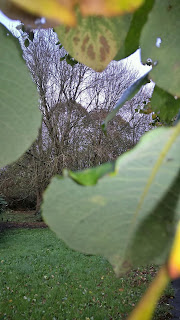