Bear Up A Tree

I hope this year is treating you well so far. I imagine those exercise equipment bought are already gathering dust or being used as expensive clothes horses.

Not a lot has been going on there's been work and the inevitable allowing of the mind to wander resulting in me trying to fit (or crowbar) Wiltshire place names into film titles which is a variation of numerous Twitter memes admittedly. So a late afternoon war spent coming up with films like Scenes From A Marlborough, The Rodbourne Supremacy, The Ogbourne Ultimatum, Park South The Movie, Wild Wild Westbury. I could go on and on but you'll be mercifully delighted to hear, I wont. 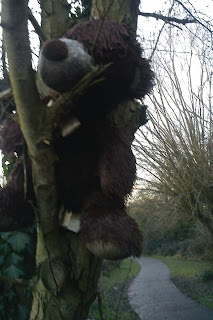 The bear up the tree I photographed along the bridle path on my way home having suffered the rather soggy and cold weather and looking definitely worse for it. Makes a change from the symbol of modern Britain, a bag of dog poo being tied to a branch which always made of wonder why, especially when there were designated bins nearby. When I was growing up (and even in the mid 90's) there were no bins and owners were not as thoughtful. In Marlborough there was one such lane from a well-to-do part of town to the High Street which was so befouled it was commonly referred to as dog shit alley where you would be lucky not to end up with something horrible on your shoe.
2 comments:

Just been giving the blog a spring clean and clearing dead links. I also had a look at the search keywords used to reach the site, a lot of these are searching for others I have linked to on the side or in the past some are no longer there, searches for Stephanie's Pillowbook are numerous as are the Candyfloss Girl, Abi and others. I probably disappointed the student who I presume had a upcoming tutorial when the searched for "workshop on wednesbury unreasonableness" and as for "lesbian lust transv tvchix estate sex" I don't know what to make of.

So without further to do, here are my ambitions for the year, just don't call them resolutions.