I Went To A Marvelous Party - Part 1 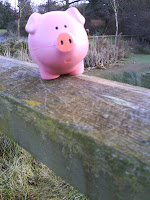 I didn't see a concrete cow but I did get up close with a plastic pig. One of the legendary Unison stunt pigs no less

Just one of several highlights from my visit to Fenny Stratford and the infamous Pink Punters, having left my West country coven to travel across the Thames Valley by train and by bus. According to Google maps the distance was about 72.8 miles. Though most transport companies required me to take a lengthy and expensive detour via London (in the case of National Express, Heathrow) probably not a good thing on a Friday afternoon and and given the cancellations and delays it was probably a smart move.

After much searching I figured the best and quickest way was to get myself into Swindon, travel to Oxford, get the twice hourly bus to Cambridge which stops at Milton Keynes and get a train for the short ride to Fenny Stratford.

For some reason I also decided to attempt it dressed, I suppose, just to prove to myself that I could. Although this involved taking more time to get ready, which I didn't take fully into account hideously underestimating the time it takes to get ready, especially when straightening hair. Cutting the story short it rained the whole time, got splashed by a passing car and walked from Bletchley station.

So I arrive, damp, runny make-up and my hair frizzled, I felt like crap. Though I'm sure the reception have seen worse. On a normal night the sensible course of action would be to put on a nightie and crawl into bed but this was not a normal or sensible night.

Stumbling in to the hotel room I could hear the noise from adjoining rooms and folks rushing about. So little time to rest before I joined them in getting ready, my nails needed finishing and the hair needed to dry and be fixed again for a start. There was also the question of fixing up my face and the supreme engineering achievement that is my support underwear (seriously Brunel would stand up and applaud it, while I'm on the great Victorian engineer why are there so many bland and just plain awful buildings bearing his name? Almost in inverse proportion to his own great achievements. Slough has a particularly dreadful building named after him but the one I saw in Bletchley was not very inspiring. To the man who designed the Clifton Suspension Bridge across the Avon Gorge among many other great feet's of engineering, we name a bit of grey concrete that will crumble and smell slightly of piss. Yes that's a Fantastic tribute.

I'm sorry I digressed, where was I?

My make-up skills had grown a little flabby owing to the fact I hadn't been anywhere and had long ago given up putting on the slap while at home.

I suspect it was largely caused by the unfamiliarity of the place I was going to and meeting some people I'd been looking forward to meeting. Once past my initial turbulence the metaphorical pilots voice kicked in telling me I've landed the plane far too often to feel like that and true enough once I took the controls it became simple. By now the noise had died down obviously everyone had gone, but not everyone as I later found out.

The second act will cover the good and bad ideas I had, reel off a list of people I met avoiding it turning into one long "tranny coo".
6 comments: