Its fathers day and I hope you have a great day especially gay, trans and queer dads out there. If you are looking for something to give and your dad isn't sitting in an armchair, drinking alcohol, controlling the TV remote, watching football and farting constantly than I'm all out of suggestions as I haven't seen anything else.

I did see posts about the number one on your 14th birthday being done kind of significance to your future or something so I took a look at the official chart website and this is the top ten in Britland at three start of my 15th year. 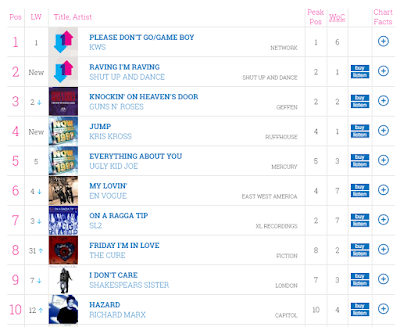 Yeah, not the greatest collection of songs, The Cure and En Vogue excepted. Two terrible cover versions on the top three and you forgot that KWS's dance version of Please Don't Go was number one for 5 weeks which says more about how static the charts were around this time it also highlights the phenomona at the time of putting a boilerplate dance beat to any old song whereas this decade putting a boilerplate minor key version to a classic dance track is the thing. I blame John Lewis and Gary Jules.
1 comment: