19:15 hours. Haven't written for a while, going to see if I can try to compile an entry on the bus. Catching the last bus home from deepest darkest Berkshire having visited my mum and dropped off a birthday card for my brother so I thought I'd try to write a stream of consciousness entry with a little tidy up when I get home.

Think the drivers in a rush to get home.

Just looked out the window for a second and saw some deer running on the top of a hill silhouetted in the dusky sky, that would have made a good photo.

A few weeks ago I went to Cardiff....

Bus went over the top of the Ridgeway and you could see the lights of several towns and villages.

...took a look at the Mardi Gras event which was in a cordoned off section of Bute Park, typical pride event really, been there before this summer. Remembered to grab some things to put in my scrapbook. Sadly a bad face day, looked a little blotchy and had a spot or two so  didn't look my best which hardly helped my confidence.

Went round the city taking photo's (which I'll hopefully remember to put in later). As I was walking back to the city centre someone who looked like a reject from Goldie Lookin Chain only without the wit, looks, intelligence or verbal dexterity shouted something homo/transphobic, I have to say if you had the choice of being abused in any accent, the Cardiff accent is probably the one I'd choose. Oh well, I know I wasn't "passing". 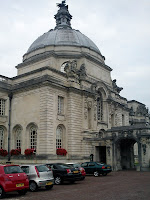 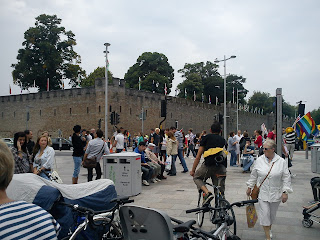 Parts of the city centre have been redeveloped and pedestrianised since last I visited a few years ago.

Time to get off, had to stop for a while on a very bendy country road somewhere in Oxfordshire, that looking at it you wouldn't think a bus could get through.
7 comments:

Just noticed a business local to me has shut down, over ten years ago as a student I was asked to look over their books (once I had written them, this is how disorganised they were) I said they were losing money and heavily in debt. Somehow they managed to limp on adding more debt, somehow I think the bank will be lucky to see more than a few pounds of the six figures its owed. With lending like that its no wonder this bank has the UK government as its largest shareholder these days.

While I'm on the subject of money, why is the reporting of finance in non-specialist media so patronising? The default position is that my tiny little brain is unable to grasp anything with money or percentages in it.

Admittedly I've been known to read the markets section of the FT but no other section seems to be treated in the same way coverage of politics doesn't have the presenter promising to use clear language and having to explain every technical term. A typical report on interest rates has the reporter saying how the average mortgage holder will pay £13 more/less a month over footage of estate agent boards and how that affects the market in great length before a brief mention of savers just because they don't want to be seen as being obsessed about home prices.
3 comments: