The Pointless Knowledge of Trannies.

Of all the things I need to recall how to do the Macarena is not normally one of them.

I can't remember how to do the dance linked to a mid nineties novelty song enriches my life. I am trying to things I learnt which might be of use dance is not one of them.

Anyway to leave all that behind I got ready to go out, everybody else it seemed like, had the same idea and although I looked alright for once I wasn't up for walking past a group of loud teenagers with music blaring from their mobiles (whatever happened to earphones).

Going home there would be a Zen like calm but going out is different, the worst thing that could happen springs to my mind. Like an alien invasion that halts just so both sides can point and laugh before the aliens successfully enslave the human race. Actually its more mundane than that but just as horrifying in my mind. The bizarre thing was that the following night the streets were empty to quote Del Amitri "The Martians could land in the carpark and no one would care".

The situation moves fast so accepting the risk that by the time you are reading this it is out of date. Here are a few thoughts.

Main Street of Wall Street?
A lot of talk has been like the two are mutually exclusive. They aren't. A failure to get even a short term loan will impale many small businesses because banks can't get the money themselves. Consumer confidence impacts on the markets. It is not just mortgages, important though they may be. Talking of which.

Bradford and Bingley.
Much like Washington Mutual, its been on the death list for so long that in one way its amazing it staggered on for this amount of time. My great sympathies are with the staff shareholders who have had a large part of their investments wiped out. Sadly money was given to people who shouldn't have received it in some cases to plonk their money in buy to let empires having watched too much channel 4.

Given that many homes under mortgage by the B&B will have been let out, their will be many innocent victims who will not know this and the first they do is when a bailiff knocks at their door to evict them. As their will be a great cost in rehousing them (a legal requirement), a sensible suggestion would be for the government to take ownership of the property allowing the tenant to stay in their house with a view to passing on to a local authority, housing association or eventually the open market.

Too Laissez-faire?
As I've noted before one can be too Laissez-faire, it was poor oversight and deregulation which led to the BSE crisis which damaged British farming arguably to this day. The Philips Enquiry into BSE / vCJD (head to bseinquiry.gov.uk for the report if you are interested) suggested that the British government in the late 1980's and 1990's was rather poor and bureaucratic in dealing with the crisis and there was a lack of coordination between departments. The subsequent foot and mouth crisis further emphasised this and it does not seem much has been learnt since. So much for joined up government.

You also blame the guys in power and they do deserve a big kicking for their many failings but such was the political consensus the other guys would have wound you in the same mess. Now that we're in the doo-doo those who oppose the government policies on both sides of the Atlantic hardly have a decent alternative. The Shadow Chancellor I'm afraid inspires little confidence and still suggests that he only got the job because his mate is the leader.

Ultimately checks have to be put in place to save companies from themselves and make banking a slower growing but more dependable business.
3 comments:

"Oh you work there as well cos I'm about to pick my daughter up from there".

Owning a top that makes it look like you work for a large supermarket chain. Not good. I get home and notice the resemblance. It won't be worn again.

I understand that in a advertising downturn the only remaining option for newspapers is to raise the cover price but I can not be the only person who after noticing the price had gone up to 90p thought to leave it (I vaguely remember some economics classes about price elasticity and that newspaper demand is more sensitive to changes in price than a commodity like oil) and just read a book, the Metro (or other free newspaper handed my way) instead. Its perhaps as well some newspapers seem they look more obsessed with turning the pages into one long promotion of their website.

When I do get somewhere I notice another Greggs has opened, just a few yards from two other branches. I suspect at their current rate of expansion I soon wouldn't be able to walk round the corner without going past a branch. (I did look at the website where they claim they plan to continue expanding significantly) Some people could say its a good indicator in a few words, about the area I live, but could also sound a little snobbish about the popular retailer of cheap sausage rolls (rather like value sausages I dread to think what goes into them) and very salty savoury snacks.
5 comments:

Simba
Originally uploaded by Lucy and some pictures

Just a post to keep the blog ticking over.

Had the cold I normally pick up at this time of year, otherwise still known as the freshers flu. Where everyone heads back to school or work and mingles their germs with everyone else's.

Have had plenty of thoughts but not the energy to build it up into a full post. Just sat back and watched the financial world go through one of its periodical madnesses.

(The lion was called Simba by my niece.)

View From the Ledge.

Another big financial house comes crashing down, and a lot of people have lost their jobs. Some are the individuals who made the poor deals that ruined Lehman and were richly rewarded at the time. But most are ordinary workers who in New York having the pain of losing their jobs compounded by walking out of their office with a few personal effects and keepsakes to be met by a large crowd of reporters, photographers and onlookers gawking at them. Some were carrying branded items which were a few weeks ago a piece of tat, have probably like Enron branded paper weights and slinky's become valuable souvenirs considering administrators are unable to pay staff in London one hopes they are.

All in all a capitalist economy should encorage risk taking but there is a difference between taking a calcutated risk and backing the three legged horse to win the Grand National and it shows a failure in current lasez-faire system of reguation, although I am sympathetic to a liberal system of regualtion it has shown not to have worked. The fact is it may not be the last financial institution to fail.
4 comments:

More Of That Sort Of Thing.

I was going to write about something else, a great humorous idea, so good in fact I thought someone must have done it before. After a little googleing I found another tranny blogger with better html skills had done just that a few years ago. So instead of the intended cracking post, here's more of the sort of thing you've come to expect.

You might have realised that my griping about my inability to apply eyeliner properly is a recurring theme. I get half way and then suddenly oops, so I'm deciding to make the best of a bad job. Do I stop half way, realising its going to go wrong? Do I plough on with a half straight half wavy combination? Or shall I not bother?

I don't get the make up out when I'm home alone, I have nowhere to go and its a bit time consuming. But I really fancy a night out and I want to look vaguely presentable and yes, slightly feminine once in a while.

I do feel it is indicative of my many failings on the road to feminity.
7 comments:

Don't pick the scab, you'll regret it.... There, I told you you'd regret it. It was there after one of those accidents that only happen to clumsy people like me, starring at me and getting itchy. The outcome you can guess.

Just tell the five o'clock shadow gag, I dare ya.
A book entitled The Libel Law, fly's across the room and hits me. Anyone else sick of the innuendo laden stories regarding Lindsey Lohan. Would the same level of titillation happen if it was a young male star? All that really matters is that she stops making really bad films. I do wonder about musicians especially rap artists who make homophobic statements, I tend to lean towards the view that the lady doth protest too much, methinks.

What next a funny deep voice?
Just heard one of those hackneyed comedy routines, could almost have predicted what came next. I presume if I stuck around around he would have done a Stephen Hawking voice and other tired routines. I'll stop trannies complaining about such things are just as old and hackneyed as those old jokes.

Can't Live Without... My Tat

It is not glam and lacy (I could live without) but its my interpretation of fashion item I couldn't live without. After seening the ordinary bland items I wear if I did have any admirers they would have given up. I did consider poseing in it but decided that I would spare your eyes and the necessity to bleach them out. Here is what I uploaded as my little contribution. 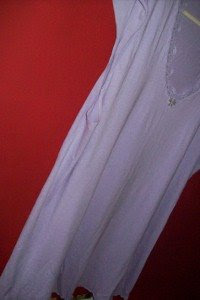 Wow! I hear you say. If I get time I'll photograph the shoes I wore the first time I went out.
2 comments:

"Mary Smith will be moving off your business. Now that we understand your business better, we are replacing her with someone who we feel will be a better partner for you."

Above is one suggested way Carat US' dress up communicate to clients the fact that the previous person looking after their account was given the boot, in an email sent discussing staff cuts only intended for senior managers was cc'ed to the whole company.

Finally a company wide circular that's worth reading not just clogging up your inbox. Although the cuts will probably be updated soon to include the head of HR who sent the email.
3 comments:

On the Photographers Gallery website there is a nice online gallery, where users can upload and share a story about he piece of clothing or accessory you can not live without. The examples above are taken from the site and there are many nice tales about why they're indispensable. The physical exhibitions in London have already been mentioned on many other sites like Helena's (the current exhibition hasn't got long to run). I may raid my wardrobe and add a photo of my own.