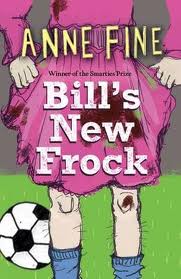 “Bill Simpson wakes up to find he's a girl, and worse, his mother makes him wear a frilly pink dress to school. How on earth is he going to survive a whole day like this? Everything just seems to be different for girls”.
Bill’s New Frock is a children’s book which superbly examines gender roles and how children are treated differently because of it by adults and his peers.  There is no magic spell or explanation, it just is. Instead we just follow a journey where he experiences, from his initial horror and later bafflement, of being in a girl’s world and finding it different in many ways.
It seems as true today as when it was published in 1989 and when I first came across it in the early 1990’s. Anne Fine describes it all in wonderfully vivid language, posing the question why does Rapunzel wait to be rescued instead of making a rope from her own hair and climbing down?

The Chaos Of Trouble

And so its April, a time of local election campaigns and where money is suddenly found to do improvements and turn street light back on, providing local council leaders with regular photo opportunities in the local media especially the Swindon Advertiser. Though looking at their dwindling circulation and thinning advertising you wonder how long they'll be around for.

Talking of newspapers The Sunday Times Style Magazine had an article about the pressure women faced to be stick thin and blemish free. Citing the unrealistic portrayals in the media as not helping it went on to mention the work of The Geena Davis Institute whose work to gender stereotypes and the portrayal of female characters in the media, sounds totally worthy of my support.

Unfortunately the section rather undermined this message by on the following page placing an advert for moisturiser featuring two models thoroughly photo-shopped and a feature several pages on headlined how to get on in the office, just had a lot of pretty clothes you could buy instead of something really useful to advance in your career.

As you are probably aware the Home Office has opened up a period of consultation into civil marriage consultation, all the detail's and questions are on the website and if you haven't already I'd encourage you to take a few minutes to respond by the deadline. You can guess my opinions on the matter and my hope that it will resolve the ridiculous position with transsexuals and the spouses post transition.

I stumbled over the fact the Ben & Jerry's ice cream brand have come out in support. It's remarkable that they have managed the feat of maintaining credibility despite being part of the hyper-global-mega-Unilever corp. Some brands can't be controversial while others like Benetton, being the text book example, can. Then there's alliteratively named turf accountants who I wont mention. Enough has been said about the two ads one invited negative stereotypes and mockery of trans people, the other involved the word chav which is generally used by smug Jet types to mock poor people and its use I hope will continue its increasing unacceptability.

And that's it, no exciting adventures just an exchange of witty bonhomie from some teenage girls, a few more grey hairs and to get round to having the chat all over again with my new gp, having moved out of Dr Hairybum's catchment.

So here's Kermit being David Byrne.

Do You Really Want To Know My Name 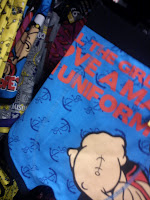 I’ve never understood the attraction of novelty / character pants; generally they’re children’s characters and while some people want a beloved animated character from their childhood on a bit of cloth in front of their privates. Not very arousing or sexy either. It all smacks as being dubiously infantile and should follow the novelty tie into near oblivion. 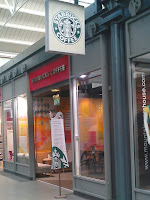 As I’ve said before you can buy cheaper and better coffee than Starbucks and in a less false, homogenised corporate environment. But then again it keeps the fools, many of whom ostentatiously flash their iPhone’s (presumably to get a free fatty over-sweet flavoured gloop into their drink), out of my place ensuring I can get a seat. Also thankfully they don’t have to ask my name and pretend like they really care in some horrible attempt at so-called personalising the experience.

All I want is a nice tasting hot beverage which also provides me with a decent dose of caffeine, not a pretend “relationship”.

Talking of keeping people out of your favoured store Greggs does the same for my preferred sandwich place at lunchtime it perhaps says a lot for the power of the brand that people are prepared to queue out the shop for food that I find bland and salty. Probably says a lot about the brand and their customers loyalty.
1 comment: