A lot can happen in ten years.

Continuing the final thought of the last post regarding where did the time go? While the time feels like it has passed quickly, a lot of stuff has happened. Consider the last ten years for example.

1998 B*Witched and Steps were storming the chats (sings C'est la Vie), Britney Spears was getting ready to do the same somewhere out west and Bill Clinton gets impeached, essentially for having oral sex from someone not his wife.

Ten years on America seems to have given up impeaching despite the incompetence (Iraq), neglect (Katrina) and spite (Valerie Plame affair) of the current administration. While Britain has taken to selecting number two's clearly not up to the top job (Steve McClaren, Gordon Brown) and developed and lost a collective obsession with Big Brother.

In pop, new boy bands have disappeared having fallen out of favour with the public,. Britney's known more for being declared an unfit mother. The Backstreet Boys have had two comebacks while muttering things like "I wish I saved my money better" presumably. Finally Claire (pictured) formally from Steps has put her feet up, had a kid, put on a bit of weight and looks healthier and more attractive to my eye.
Me and my friends of that time have also changed and drifted apart, the ones I've met are still nice people (which isn't always the case) but we're different now as a result of time and our individual experiences.

Who knows for sure where we'll be in the next decade, that's scary but more interesting and fun. There are tales about politicians who when they enter parliament have plans to join the cabinet by xxxx and be prime minister by xxxx. I have no such targets mapped out in my mind, not that I intend to let my life drift by as I probably have done at times, its just that my wanderlust, gender issues, health and other things that I can't yet imagine may take me somewhere else.

It's going to be a fun ride.
No comments:

My life clock is flashing red and soon the Carousel awaits.

"I wish I could be 30 again" said a woman I know, when informed of my impending birthday. She certainly did mean it but sadly we can't turn back time (despite what the ad's for cosmetics and surgery in women's magazines say). It was also her attempt to be nice and make me feel better correctly senceing that I am feeling a good deal older all of a suddern. Where did all my life so far go?
No comments:

"Are you realated to the director general of Swedish television?"

It's another year where I've failed to pick out the eventual winner. My three picks were Iceland (probably a bit too modern?), Sweden and Ukraine while I thought the French entry interesting.

The Bizarreness from the "brides of Frankenstein" of Bosnia, was oddly popular and showed the fact that it is more a performance than a song contest

I spent most of the evening agreeing with Sir Terry and sharing his frustration but whatever you do please don't quit. Here's why.

Dull Meetings and the Veggie Option.

Having attended a very dull meeting about something or other, to be honest my brain was humming the theme to the Fresh Prince of Bel-Air and thinking things like "ooh I like her her top and hair style" about the woman near me (the big tranny that I am).

So in short what I remember about it "blah investment yada consumer zzzzzzzzzz in west Philidelphia born and raised on a playground....".

After helping myself to the vegitarian option on the buffet afterwards, a cheese and pickle sandwhich and being buttonhold into making small talk without moveing on to something substantial.

I made my way to the tube staion considering the time I could have spent on something fun or productive.
1 comment:

"Welcome to a Womens World"

I have a low pain threshold, practically feinting when I get a paper cut. I had my hair styled recently which involved the hair dresser inflicting a blade pulling through my hair as it was being styled.

It's not long in a women's sense (it never will be) but a lot longer than the average male.

Relating this back to my mother she replied, "welcome to a women's world" she is, of course right (You wouldn't expect me to say anything else).

Perhaps this relates back to my previous post considering whether men have it so much easier (thanks for the thought provokeing replies by the way).

It may be hard for many to understand or empathise with the following statement which is that I feel better with longer hair (mentally not financially that is). Its something I wish I had the bravery to do years ago. Despite what I warn myself are the corrosive effects of regret I can't help thinking of those years as somehow wasted.

Summer In The City..

A warm spell arrived and appears to have departed, a good time to jot some observations on summertime fashions.
But hey, what do I know.
No comments:

Single, On A Bank Holiday Weekend.

It's late and It's raining men by the Weather Girls has come on, with the classic line "God bless mother nature, she's a single woman too". It's not a easy song to perform on Singstar (my version though, is far better the Geri Halliwell's abomination). Co-writtern by Paul Shaffer, incedently. (Video via You Tube).

Still single, it has some good points and many bad. At the moment I'm focusing on the good.

I have been thinking about whether things are easier for men for a few weeks then I see this on the Postsecret blog. 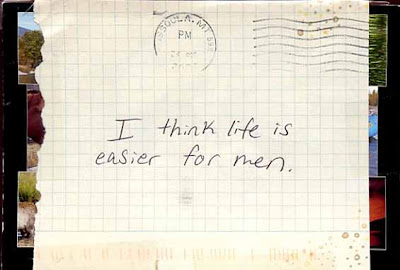 I am a medical student who recently heard a doctor who works with people who are going through gender reassignments. The (male) doctor said that as part of the pre-surgery counseling, he always asks the male-to-female patients if they are ready to give up their privileged-male status in society. He said the patients often come back to him after they have completed their transition into a female. They tell him that they didn’t realize how significant the privileged-male status is.

It does seem odd when you put it like that. I don't dispute what is being claimed, and yet many born males feel better becoming female and feel perfectly natural (admittedly the language is a bit simplistic but I hope you get the point).

A Little Bit of Politics.

People are leaving the sinking ship, prior to the election headhunters were being tipped off that Labour's comms specialists were looking for new posts, after the election's there may be a few M.P.'s brushing up their c.v.'s as well.

Mutterings about renewal will not mean anything unless it is finally accompanied by action. Those on the left will claim that means abandoning the new Labour project, I wouldn't go that far but it will mean serious attempts to build bridges with the party's core support mightily peeved off with them.
One of my hobby horses is social housing (I'll leave income tax rates for another time). It is a fact that not everyone will own a property and will remain in rented accommodation for their whole lives, this current stock is getting run down and desperately short in many areas. This shortage breads resentment and partly contributes to the success of the BNP in certain areas.
(Jenny Harvey has added her thoughts and personal experience of hatred)

The highlight of the election coverage was watching Jeremy Vine effecting a western style accent to show the Lib Dems past performance.
No comments: