The Joy of Poundland 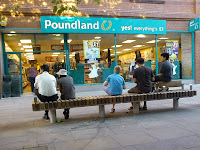 Poundland is a unique shopping experience full of interesting customers (not as interesting as those in the 99p store down the road, but interesting none the less) and a lot of mainly cheap tat.

On a damp, wet day and wishing not to arrive at my meeting looking drenched and dishevelled, I went in there to buy a cheap umbrella but as soon as you enter you're assaulted by offers despite knowing that some of it is made of material so cheap it will disintegrate by the time the packaging is opened. Its much like the IKEA formula where the customer thinks they're only going into the store for a wardrobe and come out with a shoe tree, an "innovative" cup hook and some glittery shower curtain rings.

There's a huge pile of After Eight's to start. After Eight chocolate's are the sort of thing which were sold as being classy, posh and sophisticated but were none of the above which places them alongside items such as Vienetta ice cream and stretch limousine's.

The book section is a sad area of unloved books that nobody bought filling the shelves, serving as a reminder to the occasionally over optimistic hubris of the publishing industry like the large pile of "Is It Just Me", by Richard Hammond hoping to finally find a home at a knock-down price.

In the end I got my umbrella and a few other things, naturally. For a retailer born during the 90's recession looks set to continue expanding everywhere in this one (apart from Oxford, strangely).
3 comments:

A PSA From FACT

With all the accusations that certain people are not genuine transsexuals we at FACT, the Federation Against Counterfeit Tranny's felt that we should produce a guide so you can be confidant you've brought home a genuine m2f transsexual.

Often fake transsexuals are of poor quality, can reduce viewing pleasure and jeopardise future transsexual production. Also they are sold by bad people who poke poorly kittens and don't return the shopping trolley after they've used it, so it's imperative that you help us.

If you can't find the hologram then you might want to ask a question like 'do you work in IT?' Or 'motorbikes are great aren't they? If they answer yes you can take her home with confidence.

However if they subsequently express an interest in dresses, admit to quite liking sex, having a crossdressing friend or not breaking up with their long term partner among many other crimes then you can freely message them offering your own diagnosis because the opinions of several trained professionals,sometimes experienced gatekeepers and their own knowledge of themselves patently counts for nothing.

Thank you for watching.
7 comments: