Pride Before A (Rain) Fall

Another week, another pride. This one was more local but sadly the rain didn't hold back.

Swindon Pride is very much a small provincial pride event, the main event is held in the Town Gardens a pleasant park from the Victorian era with the Bowl stage built in the 1920's with some of the art Deco touches you'd expect from that era, it was restored a few years ago and hold several outdoor concerts a year, including this one.

I did not go any further than the entrance to the stage area, can't say I'm that interested in the line-up, though looking back toward the bandstand, there was a band tuning up, so there was some alternative. I found out later it had turned muddy towards the stage I did not have the footwear for that. Perhaps I should add some nice patterned Wellington boots to my shoe collection, if only I could spot them in my size. 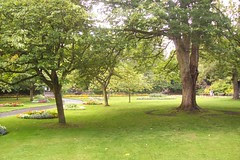 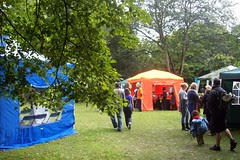 In nicer weather it would have been a great place to have a picnic, sadly the heathens really opened and we all set off to find a bar or cafe in Old Town eventually settling upon a nice Spanish bar.

Overall (leaving aside one menacingly rude man who one felt was spoiling for a confrontation, if not a fight) was that it was pleasantly youthful and friendly though there were very few trans or gender variant people that I saw

Even if my shoes were wet. Got a hug which made it worth getting damp.

There was a group going round offering free hugs (nope me neither) which decided to give me one, for some reason, which I tried to respond to in some non shy English way and failed miserably.

Thank you to Jenny and her wife for the lift there, I'm sorry I messed up the directions though the roundabout obsessed West Swindon (Lydiard Millicent is not a bad village though:)) and to those I met including Jae.
3 comments: Links to this post

A Pride Suitable For Vegans

But enough 1990’s rap references this concerns a long rail trip, feeling a little queasy, an unimaginably large marital aide, trying to find a 20p to spend a penny, meeting people old and new, a pride parade and more people than you can imagine in a field in East Sussex.

While you figure out how a marital aide fits in I’ll start.

The day stated just before 6 rushing about and trying to perform the challenging task of getting ready in a personal record time of under an hour, despite having prepared the night before it was still a challenge. In my rush grabbed a red top to guard against the morning chill, by the time I was on a stuffy train to Brighton I kinda wish I hadn’t done so.

The previous day someone had helped themselves to some copper, unfortunately this copper was needed for a signal box just outside of Reading resulting all sorts of chaotic delays and cancellations. So I went to bed the previous night unsure whether my train would be there or if I’d have to find an alternative route but checking the National Rail site I found the area had been patched up and things were running normally and I was back to plan A sitting on a damp and cold platform, trying to connect to the free wi-fi.

I made it to Paddington and took the warm tube to Victoria early enough to wander round the shops and get to the train in enough time to find a seat and join the great decent of Londoners to the south coast. It was to be a feature from then on that I was to be surrounded by a mass of people but at least when I made it to Brighton Station I stood out less then I did two and a half hours earlier. Also I’m early, so there can’t be many about....

How wrong I was. By the time I got to the meet-up place it was packed.

My pumps gave me a blister last time I wore them to the Spectrum picnic and became incredibly painful to walk in towards the end, so I had a pair of walking shoes as insurance. Eventually got to the parade start where even more crowds joined in to throng the pavements, ditched the red top and just wore the cardigan over my tweed pinafore dress.

Rather shyly said hi to a few people I recognised and was introduced to some new ones. Then watched the parade, during which the cloud cover lifted. I did take a few images though they were partly obscured by the bus at the parade start. I noticed that Helena, with her photographers eye had moved to the front, either that or I’d made such a good initial impression that she’d prefer to stand in front of a bus. Anyway I’m sure you get the idea of what a pride parade looks like. 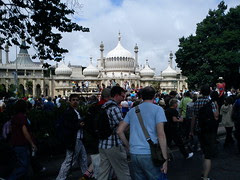 Afterwards the mass crowds subsumed myself and headed away. After a diversion for a latte in a nice cafe where I flicked through the Indy and Guardian while everyone else had something to eat or decided to be sociable I followed the rest towards Preston Park up the closed off streets which became more and more crowded. There was no space until we stepped away from the flow of the crowd and toward the tall clock tower.

There Kimberly was due to turn up, obviously, so many people in such a space puts a strain on the mobile networks but eventually contact was made and she joined us. A slow meander through the stalls showed one that stocked whips and harnesses in leather and those suitable for vegans. Wandering further along in shoes which are also suitable for vegans I saw a stall which stocked implements which ran from the feasible to the how the hell can you use that. But it wasn’t all adult toys, there were those selling t-shirts, jewellery, pants with some gentlemen modelling said product among other things.

Inevitably photos were taken and then we sloped off in different directions personally I felt a little woozy though I thought that was because of the warm air coupled with the fact I really needed the bathroom, which we eventually found at the station. Got to pay to get in, arrrgh, desperate scramble to find my change, Kimberly kindly lent me a coin though fortunately I find the pouch where I stowed my own money just in time.

Myself, Kimberly, Saffy, Helena, Sue and joined later by Kimberly’s other half sadly I didn’t feel better and the last thing they needed was a non-eating sickly person spoiling their meal any more than I had done already.

You know when you've been ill you feel a little better until you look at what you've brought up and then another load comes out. Not nice isn't it?

Brighton station had been set up to handle a mass exodus though there wasn’t a huge number of people there, presumably one rush had past and there would be one later on tonight but I still had to sail up and down the barriers to get to the platform and then find a train to Gatwick Airport where I’d change for the long journey home, no loo but plenty of space, fresh air and a front facing seat. As I got off at Gatwick I could hear a group of loud men sounding slightly the worse for wear on one of the bridges linking the platforms my trans sense of self preservation kicked in and I decided to disappear the other way but not before I saw them standing at the platform I needed. I felt better if starting to feel tired, although I didn’t look it.

The train turned up and found myself a quiet area for the slow journey through nearly a dozen stations in Surrey and Berkshire to Reading and the high speed train home. Whenever it arrives. The only food around was chocolate bars, tried to eat one, didn’t finish. Thankfully got back in time for the last bus so saved money on a taxi, the only other people included an old man who was lamenting Swindon’s poor first game of the season at Brighton. He was talking about football rather than Pride, I am frequently wrong about people but he didn’t look the man who’d have more fun at the event not far away from the Withdean Stadium.