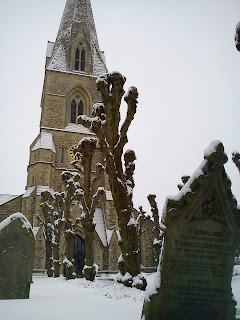 Three posts in a week, I've hardly done that most months recently let alone a fairly busy week like this one has been The photograph was taken outside Christ Church which is near the top of the hill in Old Town and can be seen for miles around especially when illuminated at night. 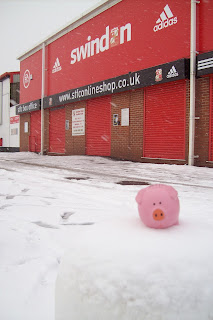 Here's a cold looking plastic pig outside the County Ground. 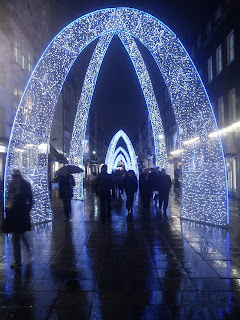 The last post was about traditions, this one is the traditional Christmas entry. Thank you for reading in 2010 and merry Christmas.
4 comments:

During Christmas day at home when I was growing up the television was on the whole day starting with the children's programmes. The strand generally ended with a very poor festive cartoon film called something like Flossy Reindeer Saves Christmas. Where the eponymous hero learns something about the true meaning of Christmas and other moralising messages pausing only for some really bad songs. Nobody's really watching it though because its presents time!

Television at Christmas time thrives on tradition, turning over just as the Queen's speech is starting and only tuning back once its safely finished. watching The Snowman on Channel 4. Which I see is being shown again, although no longer on Christmas day. Repeats give rise to that great pre Christmas traditions the newspaper article complaining about the amount of repeats. The Daily Mail managed to excel this year by publishing the piece before the schedules had been released.

Tradition is why the Sound Of Music gets another showing, personally I'm not a fan of over saccharine type films with the possible exception of Its A Wonderful Life. The great thing about tradition is that every family's traditions are different and there's probably a new one starting this year.
3 comments:

The Worm That Turned

Forced feminisation and emasculation of men featuring a stern but skimperly leather clad women including the woman from the Shake-N-Vac adverts.

It sounds like some premium top shelf adult goods but believe it or not it was a series of sketches called The Worm That Turned on a prime time BBC family show.

In the serial women rule Britain while men wear traditionally women's clothes and law and order is maintained by a secret police force led by Diana Dors. It is, simply put, one of numerous anti-feminist satires where extremist feminists take over which popped up from the mid 60's showing what a awful place it would be (for misogynists, especially television writers) if women had equal pay and opportunities. In the end the evil feminists plan is throated because deep down all they want is children, fluffy things and a penis inside them.

A lot of just makes one groan rather than feel bothered, its just dated like a time capsule into a time long gone like the Miss World. Society has moved on for instance attempts by Sky and Channel Five to broadcast Miss World Contests in the UK flopped despite the publicity.

I was reminded about The Two Ronnies for some reason on the one hand they produced some of the finest sketch comedy ever (even at the time of Not The Nine O'clock News' Two Ninies parody) produced but there was also some quite naff or hideously sexist items.
4 comments: