I met my sister in Swindon the other day. She was clothes shopping and I was more than happy to tag along. The town centre is littered with empty shops which highlights how downhill it has gone in the past 10 - 15 years faced with the more attractive outlet village based on the site of the former GWR (later BR) Railway Workshop, a few out of town retail parks and the alternative centres of Oxford, Gloucester, Bath and Bristol. At least a new shop has opened, its a pawnbroker, which says it all really. 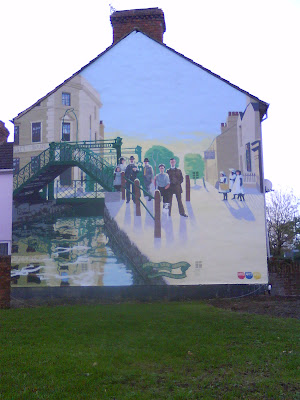 The photo is of the restored Golden Lion Bridge mural near the town centre, painted by local artist Ken White.  It was taken on my camera-phone which only has a few megapixels and no zoom so its not a fantastic image but I love the vivid colours in the restored work. Here's a better image on the Wilts and Berks Canal Trust site and how it used to look.