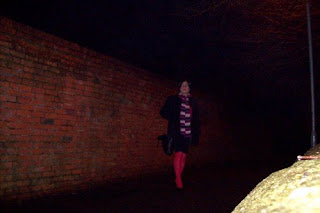 I did take a mirror this time, next time remember some flip-flops to put on if walking home.