The Longest Suicide Note In History 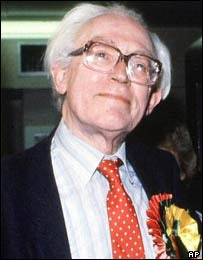 The more recent use of this phrase "the longest suicide note in history" was used to describe Windows Vista. In the UK it is more famous as Gerald Kaufman's description of the Labour party's 1983 election manifesto. The manifesto itself was based partly on the rather perverse assumption that the reason they lost in 1979 was that they were not socialist enough any polling would have told them this was not the case even among Labour supporters but for some even stranger reason they fired their pollster only to rehire him when it was too late.
Yes there are a few what were they thinking moments, some well meaning and there are a references that are of their time but a quick glance of The New Hope for Britain, shows that a lot has been implemented especially since 1997, strengthened (and in some areas new) equality legislation, equal rights for part time workers, fox hunting banned, introducing Ema's, freedom of information act, devolution, phase out TV licences for pensioners (well for the over 75's anyway), minimum wage....
There's also mention of greater government intervention in the market, including bank lending and taking a few into public ownership.
But that's clearly bonkers and will never happen.